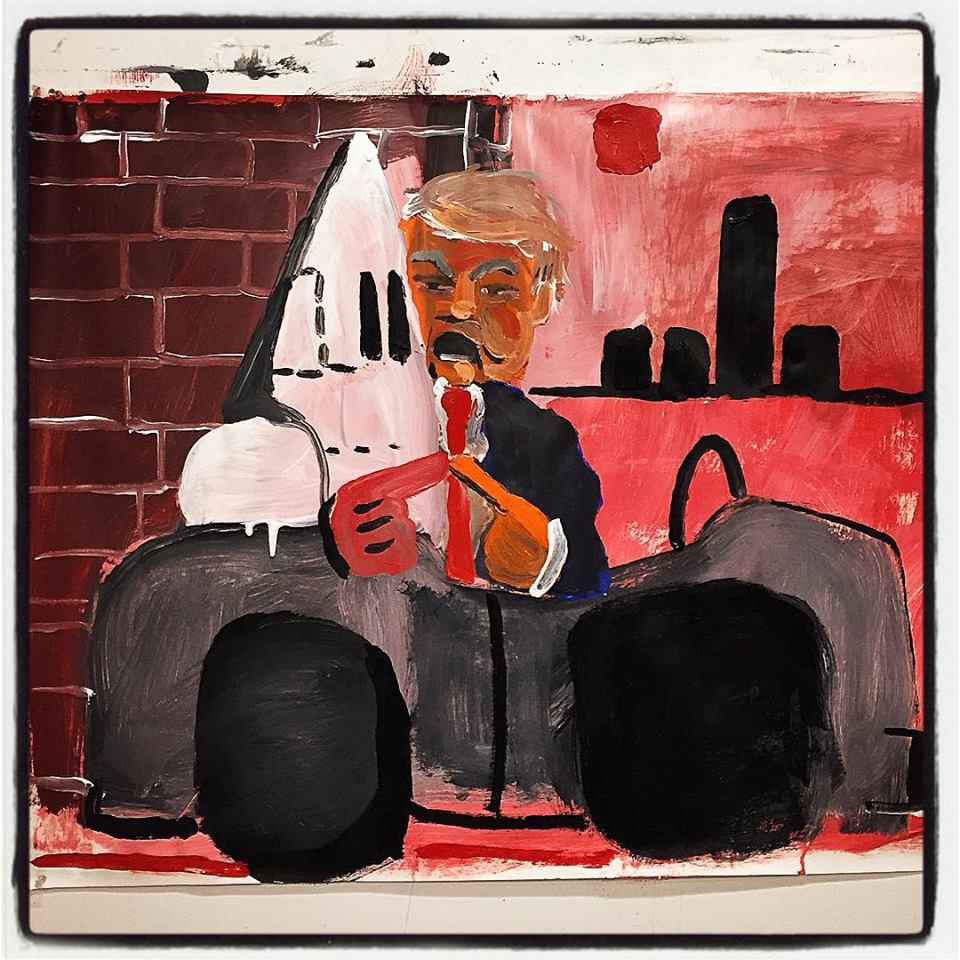 While the country nervously awaits the results of a Super Tuesday that can propel Donald Trump to the top of the GOP pack, many rational people are bewildered about how such an unlikely event has become a reality.

Trump’s campaign antics are directly aimed at the Americans who’ve long been marginalized due to their radical and hateful views. With David Duke, the former Grand Wizard of the Ku Klux Klan endorsing Trump, and given Trumps unwillingness to disavow the hatemonger’s praise; it is evident that Trump knows that his demographic includes anti-Semitic, racist, and xenophobic individuals. Worse yet, he has been embracing them all along.

Perhaps there is no more resounding work of art to express the madness and fear of a nation in crisis than Leonard Reibstein’s witty, yet gravely serious painting Great Again (2016). Reibstein’s work is at once a history painting and an art history painting. The painter juxtaposes Trump with a recognizable Klansman a la Philip Guston, the two figures form a pyramid by touching their finger tips together, symbolizing the creation of evil. Through the touching of fingers they symbolize their creation in the likeness of evil. This imagery is reminiscent of G-d and Adam in the Sistine Chapel, where G-d is reaching out to Adam -indicative of their hands not yet touching-  to give him life and signify that the image of G-d is reflected in man, yet they’re not on the same level. In Reibstein’s image, however, the two figures are in effect one and the same, just as Guston’s Klansmen were meant to be ironic self-portraits.

Guston reflected about his crude and poignant Klansmen paintings ‘They are self-portraits. I perceive myself as being behind the hood. In the new series of ‘hoods’ my attempt was really not to illustrate, to do pictures of the Ku Klux Klan, as I had done earlier. The idea of evil fascinated me […] I almost tried to imagine that I was living with the Klan. What would it be like to be evil? To plan, to plot.’ (Guston quoted in Philip Guston Paintings 1969-1980, exhibition catalogue, Whitechapel Art Gallery, London, 1982, p. 54.)

What would the late socially engaged artist say about Trump’s persona? Guston and his family of Jewish-Canadian decent were familiar with the terror and hatred that the Ku Klux Klan represented. I’d imagine that his response wouldn’t be too far off from the statement that Reibstein made. The black outlines of the buildings along the skyline says it so subtly.

This year was one of the most pleasurable Bushwick Open Studios. Aimlessly wandering throughout the many industrial spaces proved to be very inspiring. I caught up with artists who I haven’t seen in a while, and met a few new artists that I will continue to look at. Now that the party has winded down, it is time to get back to the many ongoing exhibitions throughout New York City and beyond. This suggested viewing post features a concise selection of current and upcoming exhibitions with a strong focus on painting and politically themed art.

END_OF_DOCUMENT_TOKEN_TO_BE_REPLACED

Philip Guston’s return to figurative painting was monumental for an artist who came of age with the first generation Abstract Expressionists. He is best known for these disordered figurative paintings of hooded klansmen, cigarette butts, and other cartoonesque objects and symbols, which he began to create in the late 1960s.

Guston is still a major influence on contemporary painterly discourse, and a new exhibition at The Lodge Gallery in the Lower East Side seeks to explore and celebrate Guston’s iconoclastic legacy on today’s contemporary painters. Heathen Fundamentalism, the current exhibition at The Lodge Gallery, features seven contemporary artists who channel elements of Guston’s work to create painterly conversation with him posthumously. Like Guston, each of the seven artists in the exhibition create “impure” painterly imagery, break the mold of aesthetic monotony, and reflect on their cultural environment in a uniquely personal way.
END_OF_DOCUMENT_TOKEN_TO_BE_REPLACED

By the late 1970s, art criticism had begun to question the formalist ideals that dominated the era of the New York School, which defined painting as an absolute and universal form of art, and some critics—such as Douglas Crimp (b. 1944), Yves-Alain Bois (b. 1952), Carter Ratcliff (b.1941), and Barbara Rose (b.1938)—even went so far as to raise the question of whether painting was dead as an important art form (See Barbara Rose, “The Politics of Art, Part IV,” Arts Magazine 54 (December 1979): 134; Yves-Alain Bois, “Painting: The Task of Mourning,” in Endgame: Reference and Simulation in Recent Painting and Sculpture, ed. David Joselit (Cambridge, MA: The MIT Press, 1986), 29; and Carter Ratcliff, “Modem Life,” Artforum 23 (Summer 1986). Indeed, in a 1981 article “The End of Painting,” October 16 (Spring 1981), Crimp argued that painting in the 1960s had been in a terminal state. To this view, he cited such factors as the style of hard-edged Minimalism and color field painting and the use of new media, such as images appropriated from photography in painting, as evidence of a “definitive rupture with painting’s unavoidable ties to a centuries-old idealism.”