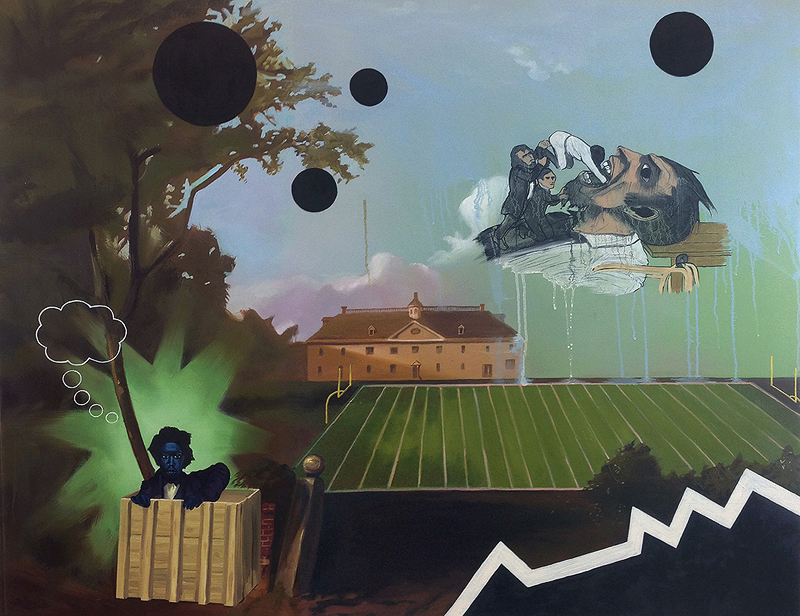 I first saw Ronald Hall’s paintings on Smack Mellon’s 2015 Hot Picks list. They immediately resonated with me as a powerful  non-linear narrative of African American identity and the search, and struggle to depict what it means to be human in tragic times. Hall blends expressionism with realism in his dreamlike environments, which contain archetypal symbols of African American culture. Ronald has a long background in video game development, which I also feel has influenced the unique way he composes his paintings. The following is a conversation that I had with Ronald Hall about his recent work.

Do you consider yourself a Humanist artist?

To be honest, I’ve never been asked this question before, nor have I ever given it any thought until you asked! I guess I’d have to answer yes. I guess I could be considered a Humanist artist on some levels. If being a Humanist artist means to care about humans, people and humanity as a whole, and how my art could have an effect on such, then again I would probably answer yes.

In your poetic visual narratives you often reference the past, yet conflate these images of Slavery and Jim Crow with today’s urban settings. There’s also historical titles juxtaposed with popular culture references. What do you anticipate that the viewer may take away from viewing your paintings?

I’m not so sure that I always really know what I want the viewer to think when viewing my work, I feel like I’m just another person doing what every human should do on some level or another, and that is to do what we can to help society move forward in a positive and meaningful way, to uphold the truths and values of the historical ramifications that have been bestowed upon this country we live in. Artists have to care about the future and how it relates to the past.

Your compositions have a lot going on. There’s both historical and contemporary iconographic imagery juxtaposed with abstract and surreal environments. It reminds me of those texturally rich layered cgi environments of role playing video games. What is your thought process in arranging these compositions?

To me, painting or art in general, made by an artist, an individual artist, should be about his or her personal experiences, likes and dislikes. I’ve been an artist for a long time, making different kinds of art over the years, it’s come to a head, to a point where there is an obvious fusion and juxtaposition of all that’s culminated over the years, involving my experiences, trials and tribulations as a person and as an artist. All artists have a choice on how or what they want to say or express in their art. I choose to make art that reflects all the things I like about painting, about art, about my life, about my experiences, about my love for Black History and the desire to continue learning about all these things as I progress as an artist. I also have a long background history in digital art, I helped to develop video games for Nintendo for 15 years and I still indulge in game development today. With all that being stated, my work is a culmination of being a black person, loving being a black person, loving painting, loving digital art and the coolness of what I love and have learned about art history, contemporary art and African American History.

How does autobiography and self reflection effect your work?

Sometimes my personal experiences and views appear in my paintings in ways that I couldn’t at first conceive. The messages are sometimes a little more transparent than they are overt even to me. It is more instinctual for me as an artist to create images that are less conspicuous, thus giving the viewer something to aid themselves into contemplating about their own personal experiences and opinions.

Can you tell me about growing up in Pittsburgh and how that influenced you?

I think growing up in a predominantly black neighborhood in Pittsburgh, in the 80’s and early 90’s, can probably be described as growing up in a lot of other black neighborhoods throughout America at that time. In the 80’s and 90’s we saw the height of the drug wars, the worst of times for drug and gang violence! Growing up in a predominantly black neighborhood also, to me, made me feel more absorbed and concentrated on the idea that you are black, that your world is about being black, living black, breathing black! I haven’t lived in a predominantly black neighborhood like that in about 20 years, and that’s mainly because I’ve been able to succeed on a level that has allowed me to live where I wanted to. But no matter where I live, I couldn’t forget my background, where I came from, what I’ve seen growing up in that neighborhood at that time……friends, kids, neighbors dying daily over drugs and gun violence. Seeing a friend one day and hearing about them being shot to death the next day! Those experiences never leave a person. Those experiences allow me the ability to wipe away the constricting and common censorship sensitivities that I think, sadly to say, a lot of artists don’t have! And I’m not saying that’s something I’m proud to say, because I think all artists should be without censorship of any kind when producing their work! 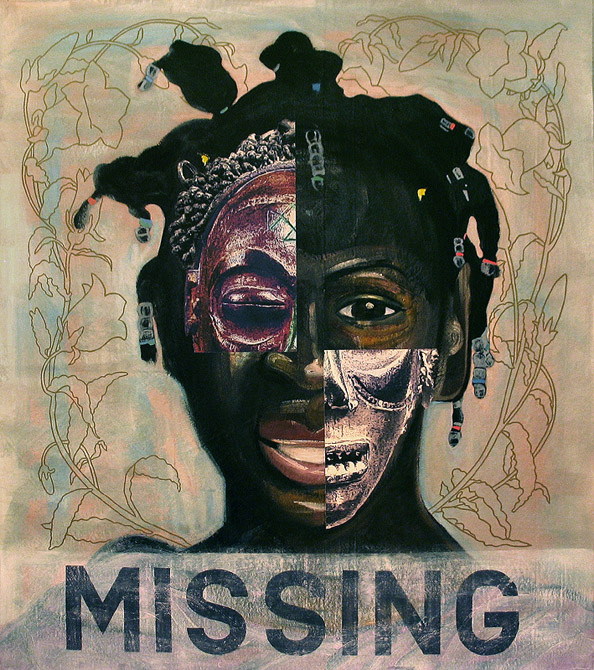 What is the narrative behind the series of “missing” images?

The Missing series was a series of painting I did several years ago as a way of helping to bring attention to the reality that kids and people of color are reported missing every year on a larger scale than their white counterparts, yet the media hardly talks about this as factual. It’s tragic when any child disappears, but it’s a different kind of tragedy if the disappearance of a child is taken less seriously by the media because of his or her color or ethnicity.

What’s next on the horizon?

I just recently finished a 3 month Residency Study Program at the Bronx Museum of The Arts, the program will culminate into an exhibition that will include all of the artists that participated in the program. The show opens to the public on July 9th, the opening reception takes place on July 15th, the exhibition will continue to be on display at the museum through September of 2015.